We asked authors to imagine their characters in different scenarios that they most likely don’t encounter in their own books and provide answers to a set of questions that we provided. As this blog feature continues, we hope that you discover some great books that you’ll simply have to get your hands on, learn a little more about the characters and the authors themselves, and have fun along with us!

Not you without me, not me without you.

Two proud kingdoms stand on opposite shores, with only a bloody history between them.

As best friend and lady-in-waiting to the princess, Branwen is guided by two principles: devotion to her homeland and hatred for the raiders who killed her parents. When she unknowingly saves the life of her enemy, he awakens her ancient healing magic and opens her heart. Branwen begins to dream of peace, but the princess she serves is not so easily convinced. Fighting for what’s right, even as her powers grow beyond her control, will set Branwen against both her best friend and the only man she’s ever loved.

Inspired by the star-crossed tale of Tristan and Eseult, this is the story of the legend’s true heroine: Branwen. For fans of Graceling and The Mists of Avalon, this is the first book of a lush fantasy trilogy about warring countries, family secrets, and forbidden romance.

Which of your characters would you most want to binge a TV show with? And what show?
Branwen and I would probably fight over the remote because we’re both pretty bossy, but I’d say our taste in TV shows is fairly similar! I could see her getting into Veronica Mars or Buffy.

Which of your characters would spoil the ending?
I guess that would have to be Essy! She can be a little, um…impatient!

Which of your characters wants to watch a rom-com?
Again, that would be Essy. Although Branwen would secretly enjoy it.

Which of your characters want to watch the B-movie horror?
That’s a tough one. I think I’d have to go with Queen Eseult. She’s stoic in public but I think she might enjoy the escapism of horror.

Who falls asleep mid-movie?
Well, Tristan has a habit of getting himself injured so he’s probably just been patched up by Branwen again and dozing on the couch.

Which character rarely watches movies or TV?
Branwen spends her free time in the castle infirmary and would probably see watching too much TV as an indulgence––but she would let Essy drag her away to binge watch the occasional show.

Who quotes the entire movie?
Since Tristan is a talented bard, I think he’s memorised his favorite movies verbatim.

What are your favorite snacks for a binge watch?
Pizza! And Doritos. Nothing healthy!

What shows have you binge watched?
Recently, I binge watched the last season of The Originals and The 100. I still ship Klaroline––even if Caroline deserves better than Klaus.

Who do you binge watch with?
Either on my own or with my husband. Thankfully we can usually agree on the show!

What are your comfort shows?
I’ve watched the entire series of Battlestar Galactica at least four times from start to finish. I also rewatch Gilmore Girls (even if Rory is the worst) pretty regularly.

How long was your longest Netflix binge (be honest, no shame)?
Why is the “Are you still watching?” pop-up so judgey?! Probably about six hours before my husband drags me out for a walk.

Kristina Pérez’s Sweet Black Waves is available for purchase here. She also has a sequel in the works titled Wild Savage Stars which is scheduled to be released in August of 2019. 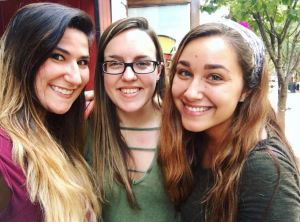 Read It & Weep is the brainchild of three friends who love books, fangirling and coffee. We are passionate, unashamed of our feels and on a mission to unite the book nerds of the world to talk, share and suggest new books. Stay tuned for book recommendations, quizzes, in-depth spoiler reviews and more! We can’t wait to cry with you.